A downloadable game for Windows, macOS, and Linux

There's shenanigans going on at the Shady Berth Motor Inn - and as receptionist it's up to YOU to sort it all out!

IMPOSTERS are posing as guests and and using your hotel rooms as havens for their despicable doings. And they must be stopped.

Watch everyone through the security monitors and send your guards out when you see something suspicous. But don't forget to check in the real guests, or you'll be out of a job.

Still a rough prototype, still being worked on!

No tutorial in the game yet, so here's what to do (WASD/mouse to move, left button to interact, right button to zoom in on stuff):

V0.6: A bunch of quality-of-life additions to make it easier to keep track of everything. Added on-screen notifications for guests checking in successfully as well as imposters escaping. Also, the guest register screen now shows checked-in guests in green. Guests and imposters will now turn on the lights when they're in their room - so if you were busy at reception and lost track of an imposter, you can still figure out where they went. And scoring finally works! \o/

V0.5: Security guard behaviour re-done and much better, the softlock bug has been identified and fixed and you can now adjust the number of guests/imposters on the title screen. Also introduced a new non-critical bug where multiple guests fight over the same spot at reception - not fixed yet because it's quite funny.

V0.4: Nicer title screen and options for mouse sensitivity and volume in the menu (though for now they reset to their default values when you start a new game - should be fixed in the next version)

V0.3: Turns out the last version had a whopper of a bug with the guards - so big I had to fix it right away. Make sure you're updated to this latest version before you play (and sorry!).

V0.2: Fixed the UI bug and a bunch of other stuff. It's still very rough and prototype-y - among other weirdness there's a rare-ish bug where guests stop arriving mid-game, effectively softlocking it. If this happens you'll have to abandon that run and restart :(. Also scoring is still borked. New versions incoming soon!

SO IS THIS A REMIX?

Yes! It's a cut down and re-jigged version of a game design I had earlier this year. That idea also had security monitors and the general idea of trying to catch people out, but it was set in an office building and had a bunch of other stuff as well. I'll probably write a devlog about it at some point (it wasn't very good). 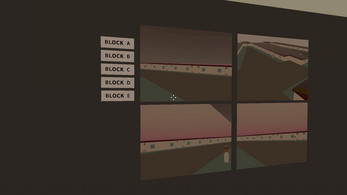 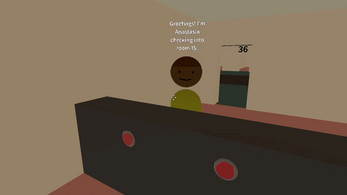